This is a tutorial I wrote for the "Digital Systems Design" course as an introduction to sequential design. "4-bit Serial Adder/Subtractor with Parallel Load" is a simple project which may help to understand use of variables in the "process" statement in VHDL. However, basic understanding of the circuits is necessary, so both schematics and VHDL implementations are given. All code is written for Basys2 development board and Xilinx ISE was used as a synthesizer/simulator.

A 4-bit serial adder circuit consists of two 4-bit shift registers with parallel load, a full adder, and a D-type flip-flop for storing carry-out. A simplified schematics of the circuit is shown below:

Create a new project with name "FourBitSerialAdderSubtractorSCH" and add exisiting source files from the archive provided:

If you click on "FourBitSerialAdderSubtractor.sch" file in the top design, you will see the circuit of the 4-bit serial adder/subtractor with parallel load as shown below:

Number "B" can be negated in two’s complement form allowing subtraction operation mode. The symbols labeled with "M2_1" are 2-to-1 multiplexers. "FD"s are D-type flip-flops. Full adder circuit is used as a module "FullAdder.sch". Its schematics is given below:

If you press on "Generate Programming File" under "Processes" panel, you will get an error:

In order to overcome this, you should create a symbol for the full adder module by going to "Sources" -> "Implementation" and choosing the "FA - FullAdder" line under "FourBitSerialAdderSubtractor" top design. After selecting it, expand "Design Utilities" section and press on "Create Schematic Symbol". The procedure is shown below:

Now you have to update all schematic files. Go to device "Sources" -> "Implementation" and choose the "xc3s100e-5cp132" device. After selecting it, expand "Design Utilities" section and press on "Update All Schematic Files". The procedure is shown below: 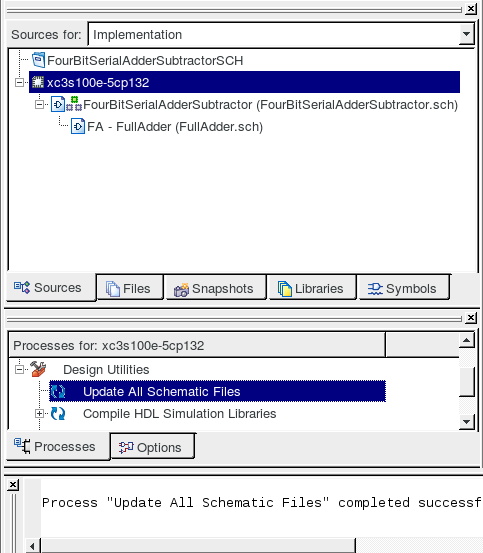 The files are ready to use now. "FourBitSerialAdderSubtractorSimulation.vhw" is a VHDL file needed to simulate the circuit behavior. This simulates addition of two numbers: A=3 and B=1 and their subsequent subraction. You may also create a test bench waveform to simulate the circuit behavior instead. As explained in figure below the result of the arithmetical operation (addition/subtraction depending on the mode) will appear in register A_REG after 4 cycles:

Create a new project with name "FourBitSerialAdderSubtractorVHDL" and add exisiting source files from the downloaded directory:

The code of the 4-bit serial adder/subtractor is given in "FourBitSerialAdderSubtractor.vhd". Sequential part requires using "process()" statement:

There is a big difference between a signal and a variable. A variable is defined in the beginning of the process and has an immediate behavior. The assignment of the value to the variable occurs immediately with no delay:

Signal on the other hand can be considered as a flip-flop (or a register). The assignment of the value to the signal (i.e. signal transfer) occurs only after one clock cycle:

This may be a reason for many bugs.

The code of the 4-bit serial adder/subtractor with parallel load is given below:

"Sum" and "CarryOut" are part of the full adder circuit. Number "B" is rotated in register B_Reg. Simulation using "FourBitSerialAdderSubtractorSimulation.vhw" file shows the same behavior as with the schematics version of the project:

After checking the pinouts of the circuit in the floorplan area or by editing the UCF-file which is given in "Basys2.ucf", the bit-file for flashing Basys2 board can be generated. Press on the "Generate Programming File" button. If the compilation process ends successfully, flash the Basys2 board with the generated bit-file using Adept program.

Demo: subtracting B from A, where A=4, B=1, the result 3 is shown after four clock cycles: