All software used for the Prometheus FPGA development board is based on open-source projects.

Windows OS users can download Prometheus Installer and start working with the board. The installer includes fireprog, Prometheus GUI and BScan SPI core.

A simple QT-based GUI which passes command arguments to fireprog and runs it in the background. The GUI is based on miniSProg project.

A core which uses BSCAN_SPARTAN3 primitive to transfer a configuration bit-stream from JTAG to SPI flash memory. It should be used in pair with fireprog to program SPI flash memory, connected to the Spartan 3 chip. VHDL code is borrowed from Jochem Govers. Constraints (the *.ucf file) were adapted for the Prometheus FPGA board which has an M25PE10 SPI flash.

A Windows installer based on NSIS. It is a 32-bit installer which also works on 64-bit machines. 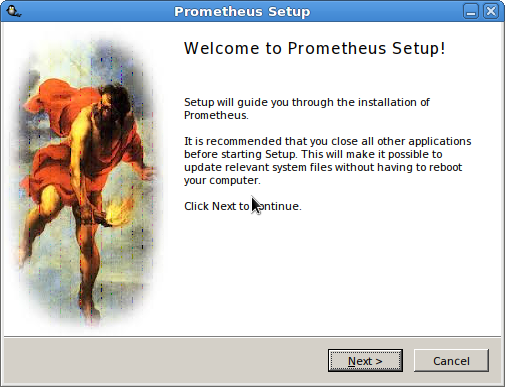 Xilinx ISE is needed to compile VHDL code into *.bit files. It is available on the official website of Xilinx.

Configuration for Xilinx ISE for the Prometheus FPGA board:

Pin numbers of input (buttons, switches) and output (LEDs, 7-segment displays) components are specified in the Prometheus_FPGA_Black_Board.ucf for Xilinx ISE 14.7.